By Varun Sood
Published On July 7, 2019 | Last Updated On December 26, 2020
A list is a built-in data structure and is a compound data type. Lists in Python are mutable and ordered sequence of elements. 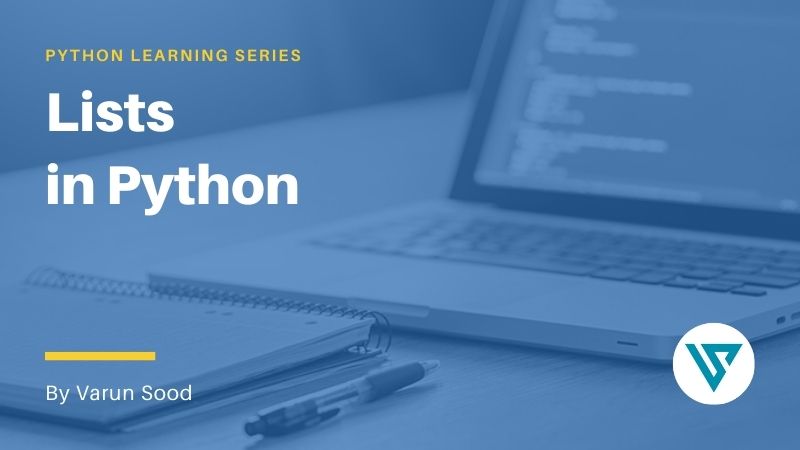 A list in Python is a mutable and ordered sequence of elements. It is a built-in data structure and is one of several compound data types supported by Python. Each element that is contained in a list is called an item. A list can contain items of different data types which makes lists very powerful. Python lists can also contain duplicate items.

A Python list is created by specifying items as comma-separated values inside square brackets [ ].

Like strings, lists in Python can also be indexed. Each item of a list corresponds to an index number. The first item has an index 0.

We can use a positive index number in square brackets and access a list item as shown below:

Since lists in Python are mutable, we can modify the items in a list. This is done using the assignment operator as shown below:

4. Modifying Lists with + and += Operators

We can concatenate two or more lists together using the + operate as shown below:

The + operator can also be used to add an item or multiple items (in list form) to the end of a list as shown below:

We can also use the += compound operator with lists as shown below:

5. Modifying Lists with * and *= Operators

We can multiply lists using the * operate as shown below:

We can also use the *= compound operator with lists as shown below:

We can use the 'del' statement to remove an item from a list at a specified index number as shown below:

We can include either end of a list by omitting one of the index numbers. For example, to create a slice that starts at the beginning of the list and ends in the middle, we have to specify only the index number after the colon as shown below:

Likewise, we can create a slice that starts in the middle of the list and includes each item until the end of the list by specifying only the index number before the colon as shown below:

We can also omit both the index numbers to create a slice that starts at the head of the list and ends at the tail of the list. This approach is helpful in combination with the stride parameter which is discussed below in this article.

It is also possible to use negative index numbers for list slicing.

In the examples above, we have used two index numbers to slice a list. It is also possible to use a third parameter called 'stride' which specifies how many items to move forward after the first item has been retrieved from the list. The default value of stride is 1.

A negative value for stride specifies that we want to extract items from the list in reverse order.

Lists support a number of methods to perform common operations. It is important to remember that lists are mutable in Python. Therefore, invoking any method on a list will affect the list itself and not a copy of the list. Some of the most commonly used Python list methods are listed below.

It adds a specified item to the end of the list.

It removes the first item from the list whose value is equal to the specified value.

Trying to remove an item which is not present in the list results in an error.

It returns the index of the first item in the list whose value is equal to the specified value.

It produces an error if there is no item in the list with the specified value.

It returns the number of times the specified value exists in the list.

It is used to sort the items in a list.

It reverses the order of items in a list.

It makes a copy of a list. It is helpful in situations when a list needs to be manipulated while still having the original list available to us unchanged.

It is used to combine lists and takes in a second list as its argument.

All subscribers get latest industry news and exclusive deals & offers straight into their inbox. Joining the mailing list is 100% FREE.

Must-Have WordPress Plugins for Any Website Development Professional or Agency

Please log in again. The login page will open in a new tab. After logging in you can close it and return to this page.